The d'Arenberg story began in 1912 when Joseph Osborn purchased the well established Milton Vineyards of 25 hectares in McLaren Vale. Joseph's son Frank soon increased the size of the vineyard to 78 hectares. Fruit was sold to local wineries until the construction of his own cellars was completed in 1928.

In 1943 Frank's son Francis d'Arenberg Osborn, universally known as "d'Arry", helped his ill father run the business, eventually assuming full management in 1957. In 1959 d'Arry decided to launch his own label d'Arenberg, named in honour of his mother, Frances Helena d'Arenberg.

By the 1970's d'Arenberg wines had become very fashionable, having gained a significant national and international profile in less than 20 years. d'Arry's son Chester took over the reins as Chief Winemaker in 1984.

He immediately set about returning the vineyards to their traditional grape growing practices of minimal inputs and no fertilisation, cultivation and irrigation wherever possible, therefore achieving natural soil flavours with very low yields, capturing the unique small-batch character of the wines and the true flavour of the McLaren Vale region.

All grapes, red and white, are basket-pressed. The reds are still traditionally fermented with the grape skins submerged in open wax-lined concrete fermenters utilising the age-old technique.

It’s Official: D’Arry Osborn Is A Legend Of The Vine

The nose shows intense blackcurrant and cranberry fruit, and the subtle cedary cinnamon spice, barrel-ferment and oak derived aromas, violet and mint scents, as well as liquorice and chocolate smells. Interwined is this wounderful green edge that lifts the wine into a cool climate sepctrum which typifies the cold year. These aromas combine with some cassis, blueberry, and cranberry, with lingering mocha and plumy fruit and are just showing through amongst a long, intense vibrant, gritty fruit tannin finish.

A perfume of grilled steak intermixed with blackberries, new saddle leather, earth, pepper, and melted licorice rises from this awesome red. With great power, richness, and no hard edges, it is still young and primary, but should hit its peak in 3-7 years, and last for two decades or more.

The 2002 season was characterised by a cold, wet winter and spring, which produced lower yields with good, thick-skinned berries. The cool and dry summer ripened fruit gradually and a warm, dry autumn allowed the grapes to ripen fully, producing some of the best and most exotic characters seen for many years.

The 2003 season was characterised by a very low winter rainfall which signalled the vine to minimize potential crop load. The ripening period was warm producing a crop load of small berries and very pure, ripe fruit characters.

Even with a smaller than normal crop load many batches showed wonderful fruit characters due to an excellent skin to pulp ratios and this is evident in the final wine. This year in particular selected parcels of fruit deemed worthy of the Dead Arm label were down 50% in volume. 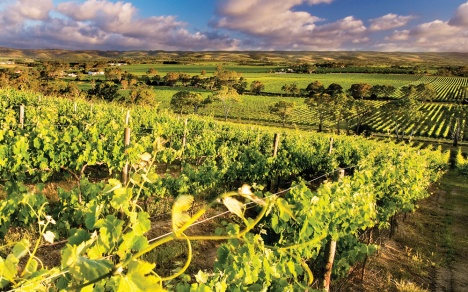 Upon release, ‘The Dead Arm’ Shiraz has a vivid, young, dense, purple-red colour. Very intense aromas with a complex combination of fragrant spices and violets, dark cherry, blackberry and blueberry, are made more complex with great liquorice, pepper and integrated svelte of boot-polish like characters. The taste is rich, gutsy and virile, with attacking spice, dark liquorice, cherry, blackberry, plum and dried black olive. The level of fruit weight masks the framework of oak tannins; however, the mineral fruit grittiness is balanced with a very long fruit-fragrant, persistent spice will yield a wine of great ageing power.

Dark vibrant saturated colours. Very youthful and compressed with the oak barely noticeable. The wine is dominated by the fragrance of red berries, spice, sour to roasted cherry, plum and cut flower stems.

The Mourvedre adds notes of ripe salami, iodine, lavender characters and late grainy tannin (often referred to as the bones of the wine).

100% secure payment
Your details are safe!

Yes, this is a pop up, but life's too short to drink bad wine so you've made a great decision by visiting our site.